The CLCPA White Paper is the first step in a process that will ultimately lead to the Commission establishing a CLCPA-mandated “program” by June 30, 2021, which will require 70% of electric load to be served by renewable energy by 2030 (“70×30 Target”) and achieving a zero-carbon emissions Statewide electric grid by 2040 (“2040 Zero-Emissions Target”). Once the “program” is established, Public Service Law Section 66-p requires the Commission to make appropriate adjustments every two years thereafter to ensure continued progress toward the statutory requirements.

The CLCPA White Paper is densely packed with policy proposals and conceptual frameworks that shed light on the manner in which those ambitious targets might be achieved. At its core, the CLCPA White Paper proposes to rely on the existing (but modified) Clean Energy Standard (CES) procurement structure—first adopted in 2016—to meet the 70×30 and 2040 Zero-Emissions Targets. But while the original CES contemplated a 50% renewables target by 2030, meeting the CLCPA’s 70×30 Target will require significant enhancements to the CES structure.

The CLCPA White Paper addresses a lingering misalignment between what the CLCPA considers “renewable energy systems” and the more expansive list of clean technologies that have been eligible under the RES component of the CES. This misalignment primarily affects biofuels, fuel cells and hydropower:

In order to estimate renewable procurement requirements to meet the 70×30 Target, the CLCPA White Paper first attempts to predict Statewide electric load in 2030 in a manner that accounts for the myriad of interwoven policies, market factors and consumer behavior that will shape the next decade of the electric grid. In doing so, DPS Staff and NYSERDA assume rapid and expansive electrification of the heating and transportation sectors to the tune of an additional 10,334 and 9,048 gigawatt hours (GWh) of load, respectively, by 2030. Those electrification efforts would be offset by an estimated (but not well-defined) 40,865 GWh reduction associated with energy efficiency improvements. When netted out, the CLCPA White Paper assumes a 2030 load projection of 151,678 GWh—70% of which would be derived from renewable sources to meet the 70×30 Target. Taking into account existing and contracted renewable energy systems, and estimating future procurement needs to fill the remaining delta, the CLCPA White Paper predicts a 2030 power profile that is comprised of six primary renewable energy categories: 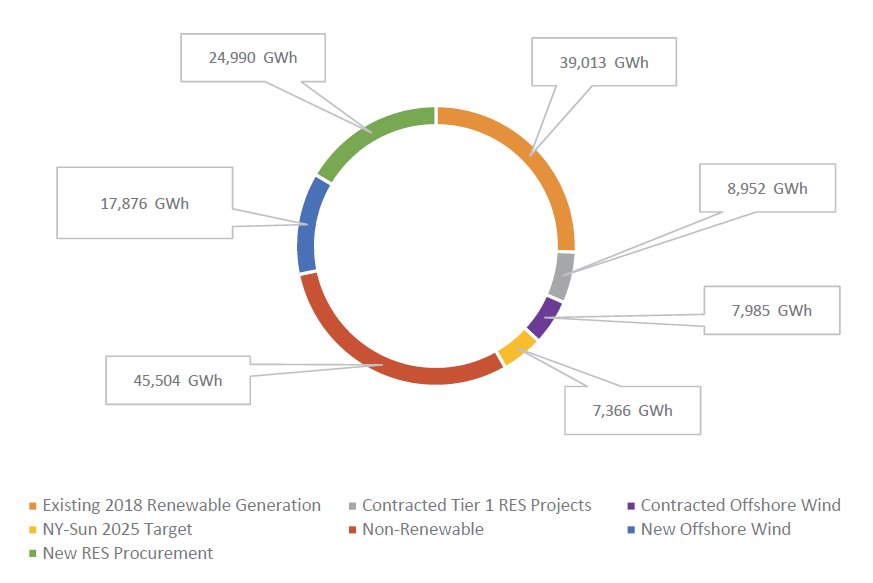 Hydropower has long played a critical role in New York State’s power grid, though not in an evenly distributed manner. Hydropower represents approximately 41% of upstate energy production, while only 4% of downstate energy production. Collectively, that’s approximately 23% of the Statewide production portfolio. Recognizing the critical role of this resource, the CLCPA White Paper provides unwavering support for the State’s hydropower facilities, going so far as to suggest that should their financial viability and market competitiveness ever be at risk, around-market subsidies—something akin to nuclear subsidies, or “Zero-Emissions Credits (ZECs)”—could be created to bolster their bottom lines.

Meeting the 70×30 Target will require an enormous increase in Tier 1 RES procurement. The CLCPA White Paper projects that NYSERDA will need to ramp up its procurement efforts by an additional 40% from the previous three years to secure 24,990 GWh of new renewable resources by 2026 to be operational by 2030. In order to meet those tight time frames, New York State will need to emphasize viable projects and ensure the newly passed Accelerated Renewable Energy Growth & Community Benefit Act (“Accelerate Act”) provides an efficient and streamlined review and approval process. In the previous decade, only six large-scale renewable energy projects successfully made it through the Article 10 gauntlet to receive certificates of completion. The newly created Office of Renewable Energy Siting will need to develop streamlined siting standards to course correct and set New York State on a path that unlocks investment and economic development initiatives in a timely manner. To remain on target, the CLCPA White Paper recommends the Commission adopt a multitude of changes to the CES procurement process, several of which are described below:

As CES procurement requirements are adjusted, so too are LSE obligations. The CLCPA White Paper acknowledges that LSEs will be subject to Tier 2 and Tier 4 REC procurement obligations if approved by the Commission—costs which are unknown, substantial and will, of course, be passed to customers. While the CLCPA White Paper recognizes that LSEs play a key role in supporting Statewide policy (and suggests that LSEs will pass through those costs to customers), the ability of certain LSEs—namely, Energy Service Companies (ESCOs)—to pass through CES costs, among other things, has come under increased scrutiny and could threaten the integrity of the retail marketplace.1 The CLCPA White Paper also recommends adjustments to the Tier 1 REC obligations for 2021 and 2022 to account for permitting and construction delays that have dampened quantities of available RECs. The updated Tier 1 REC obligations would be 2.04% in 2021, 5.61% in 2022, and 8.20% in 2023. If adopted, this recommendation will have ripple effects on the quantity of renewable energy that ESCOs must provide in order to offer eligible “green” electricity products as defined under the Commission’s December 12, 2019 Order Adopting Changes to the Retail Access Energy Market and Establishing Further Process.

The CLCPA White Paper is concentrated on CES procurements and therefore is, by its nature, supply-focused. Nevertheless, it provides some surface-level acknowledgement that while new renewable generation is necessary and appropriate, the State must also actively pursue technologies which improve the functionality and economics of existing clean resources and/or opportunities to repurpose existing facilities. A comprehensive pathway to the CLCPA mandates will require substantial and wide-ranging non-generation solutions if the State is to achieve a decarbonized power grid in an economic and efficient manner. Supply is only one-third of the equation. Demand reduction and delivery optimization efforts must also continue to be prioritized and incentivized so that new resources are strategically procured and located in close proximity to load to maximize efficiency and contain costs.

It is unclear what role the New York State Climate Action Council, formed to set policy and direct implementation of the CLCPA, will play relative to the refinement and implementation of the CLCPA White Paper, particularly as it was statutorily mandated to develop much of what is addressed therein. The CLCPA White Paper proposes groundbreaking reforms to New York State’s procurement strategy and provides insight into how DPS Staff and NYSERDA envision what could be the most transformational decade of New York State’s power grid. It also recognizes the “vast economic opportunity” that is presented by the CLCPA, noting that New York State has created 159,000 clean energy jobs in the last four years alone, representing a growth factor that is more than double that of the State’s overall economy.

For further assistance, please contact a member of the Energy Practice Team or the Phillips Lytle attorney with whom you have a relationship.